Light Up the Universe: A Photographic Display of Hanukkah Menorahs

While you’re at JCCMW, be sure to take a look at this delightful exhibit of photographs of unique Hanukkah menorahs (traditional, modern, abstract, and whimsical), drawn from the Lasser family collection. What they have in common is nine candles and an ability to ignite the imagination and light up the universe. We are so thankful to board member Jim Lasser for graciously lending us this exhibit.

Light Up the Universe Hanukkah cards are available for purchase; $18/pack of 10. All proceeds benefit JCCMW. Please email [email protected] to purchase.

Jim Lasser and his wife, Ana, collect menorahs from around the world, and they generously share their beauty in this collection of photographs. A board member for over 21 years and president of the JCCMW Nursery School for over seven years, Jim has made such an impact on JCCMW that the Nursery School lovingly presented Mr. Jim with a school bus menorah; to this day, he tells everyone that it is the most precious one to him. We thank Jim and Ana for generously lending us this exhibit. Because of years and years of Jim’s service, the JCCMW continues to elevate humanity, sustain joy, and light up the universe.

On the Road to Marrakech 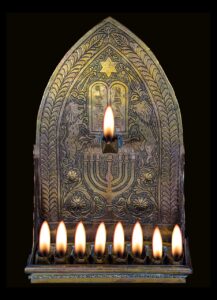 One of the two oldest pieces in our collection, this menorah is made of hammered brass and uses oil and free-floating wicks. We bought this at the Lazama Synagogue, in Marrakesh, which was selling its artifacts in the hopes of raising enough money to refurbish the building and continue to serve its shrinking community. 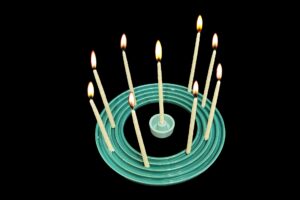 The newest piece in our collection, this menorah looks a little like the artist dropped a stone in a quiet pond and watched as the ripples spread from the center outward. 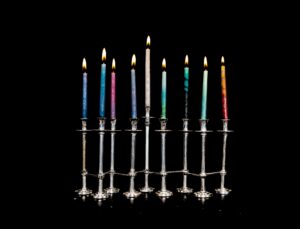 On a visit to Colonial Williamsburg, we saw individual candlesticks in this style. A few months later we were in Pottery Barn and found this. It’s base is metal and the linkages at the bottom can be folded to create different looks—and they brace candleholders that are really too tall to be stable on their own. 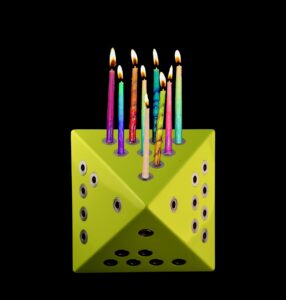 On a trip to the Jewish Museum in New York City, we saw the Octahedron in the gift shop and knew we had to make it a part of our collection. Each of the eight sides has the correct number of candleholders, a blessing for anyone who forgets what day it is.

For a Few Shekels More 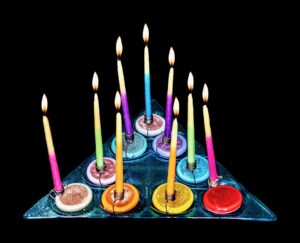 Gambling with a dreidel is a longstanding Hanukkah pastime; a practice honored by the theme of this menorah. The candleholders are glass reproductions of ancient shekels fitted with wires. The base is glass with indents to hold the coins. Nine coins don’t really make a very big pot, but for a few shekels more . . . 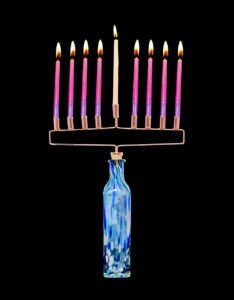 What’s a holiday without a bit of liquid cheer? Daughter Denise gave us this really clever copper design. The copper frame holding the candle cups is set into a cork, and so one just corks a bottle with it. We tried it in a bottle of good Bordeaux but ultimately preferred Denise’s choice of bottle. 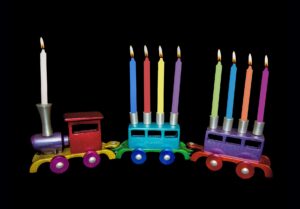 After two years of Covid-related delays, we were finally able to take some of the grandchildren on a trip this summer. We went by train from London to Paris, and around the corner from the best falafel in Paris, L’As du Falafel, we found the perfect souvenir. 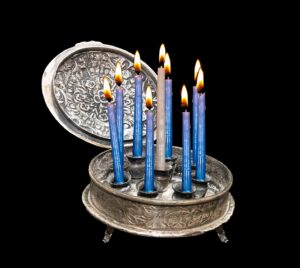 In Toledo, Spain, we found a modest shop filled with antiques and tourist souvenirs. This is a traveler’s menorah from around the time of the Expulsion. It’s silver, about four inches in diameter, and two inches high when the lid is closed. 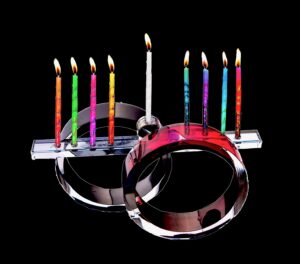 Circles are a symbol of completeness, and joining two of them, slightly offset, with the base for the candles, is brilliant design. The heavy glass is tinted red and black and demands fancy candles. 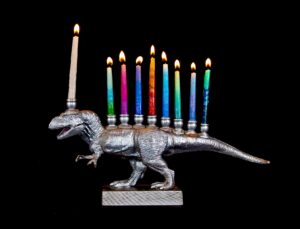 Denise discovered this online on Etsy. It’s a plastic dinosaur with candleholders along his spine, mounted on a simple wooden base and painted silver. 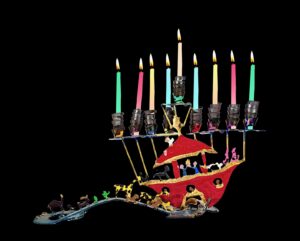 Who actually needs Noah on a fantasy ark when the animals aboard can act as the crew and the passengers? This piece came from the gift shop at Temple Israel in New Rochelle in the early 1980s. 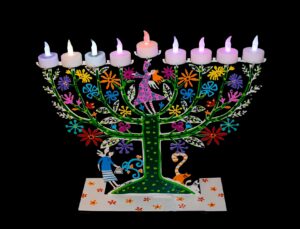 This menorah is fashioned of cut metal, enameled, and lit with LED tea lights. We purchased it at the first Bet Am Shalom craft fair we attended. It set the tone for this collection. 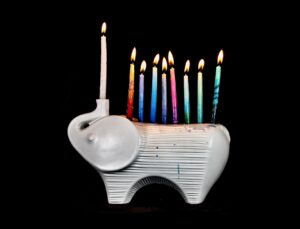 When daughter Jonina gave this to us, we looked at each other and said “Pachydermenorah!” She has enchanted children and adults alike.

You Got Some Brass 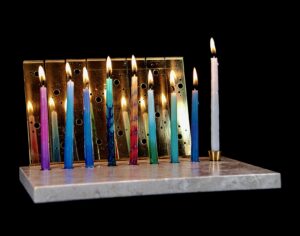 This menorah is a slab of polished stone with eight brass reflectors attached at the back edge that can be raised or lowered individually. 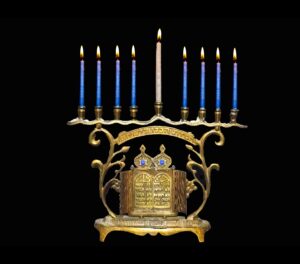 Everyone and her grandmother had a variation on this design when we were growing up. It was a “modern” piece, meant to either replace or complement an existing menorah. This one was probably my maternal grandmother’s. It’s made of brass, with a gold finish, and can only be used with wax candles. The doors on the Ark open from the center to reveal the 10 Commandments. 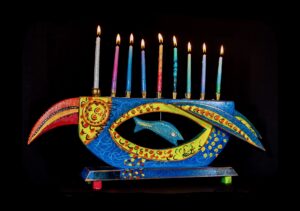 Mergansers are fish-eating birds. The connection between this brightly colored specimen, her/his dinner, and Hanukkah completely escapes us. On the other hand, children seem captivated by it. 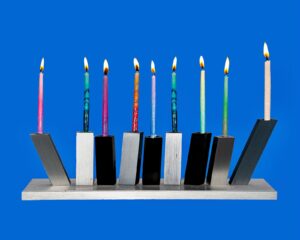 We think this one looks like a city skyline. It’s aluminum, and the candleholders swivel, allowing a variety of looks. 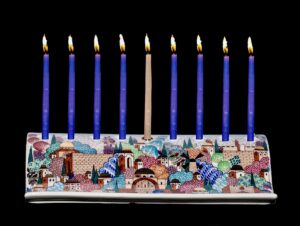 This menorah comes from the gift shop in the synagogue in St. Petersburg, Russia. It is a simple painted ceramic with the Jerusalem skyline motif. The artist is Alexander Zvezdin, an Israeli-trained artist who is a native of St. Petersburg. 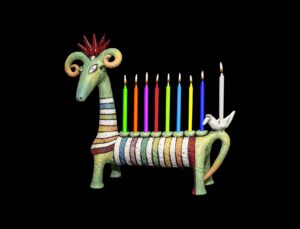 The story of Abraham and Isaac hinges on a ram. We saw this one after a year of Covid-imposed sacrifices and thought it was not only beautiful, but a fitting reminder that life should be full of joy. 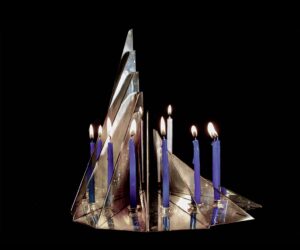 Formed of flat silver plates bolted and then soldered together, this piece throws the candles’ lights in glorious reflections. It probably came from colonial Williamsburg around the turn of the millennium. 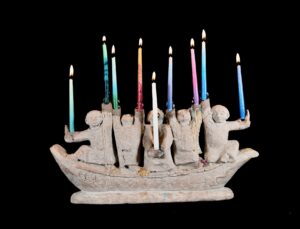 In May 1939, the SS St. Louis left Germany with more than 900 Jews aboard, heading for Cuba, fleeing Nazi persecution. After waiting five days in Havana harbor, only 28 passengers were allowed to disembark. The rest were turned away. The ship attempted to dock in Miami, but was denied entry. The captain refused to return to Germany and eventually docked in Antwerp. Passengers were dispersed to the UK, France, and the Netherlands, and the ship returned to Hamburg empty. It’s estimated that approximately one third of the passengers were victims of the Holocaust. We see this terra-cotta sculpture as representative of their despair. 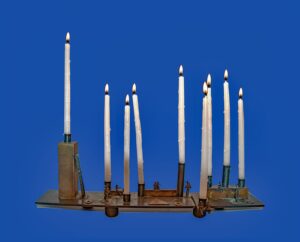 We found this piece both profoundly moving and profoundly disturbing. Crafted by the Clockworks, it may be a benign representation of a factory with smokestacks and people engaged in various activities. Or it may be a metaphorical representation of Auschwitz, with the crematory towers and figures representing Holocaust victims. The triangle was one of the badges victims of the Nazis were required to wear. 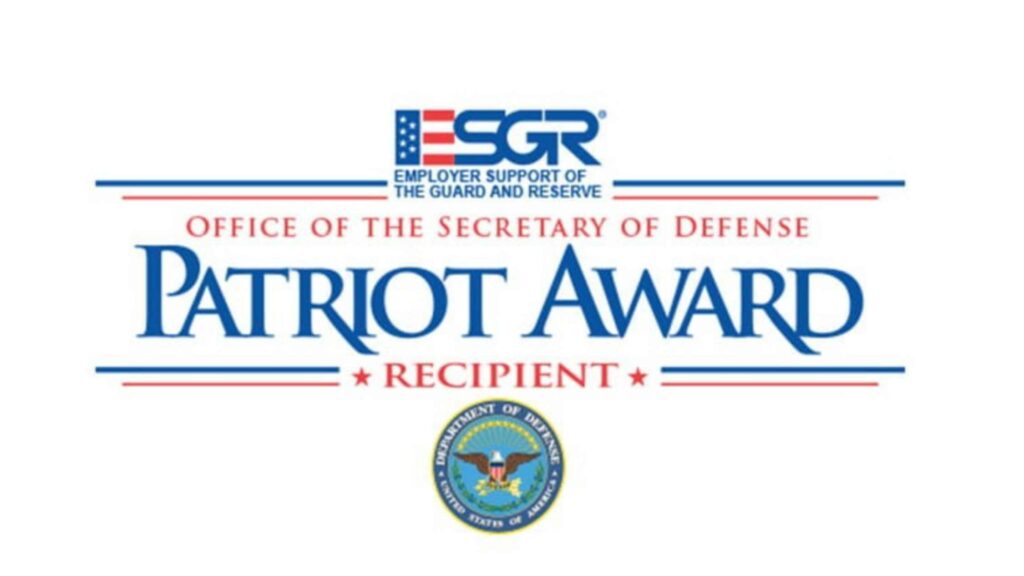 We are so proud to be honored by the Office of the Secretary of Defense for being a Patriotic Employer. Kudos to Mara Roberge, community engagement director, and our Sunday/Funday staff member in the United States Army Reserve, Philip Chantz. 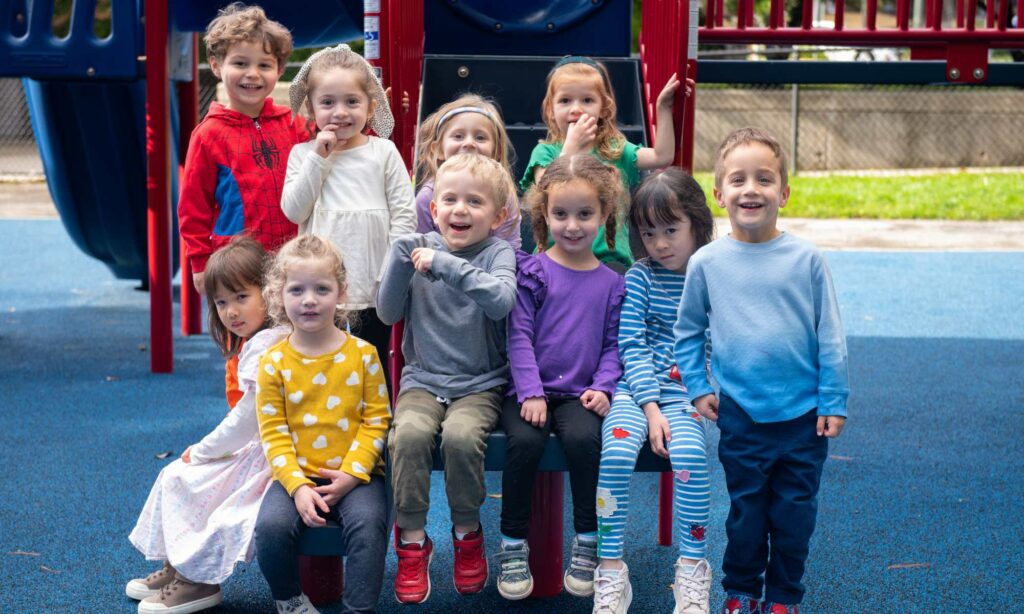 Registration is now available for our 2023–2024 programs for ages two through five, including our Fives kindergarten bridge class and early and after care. 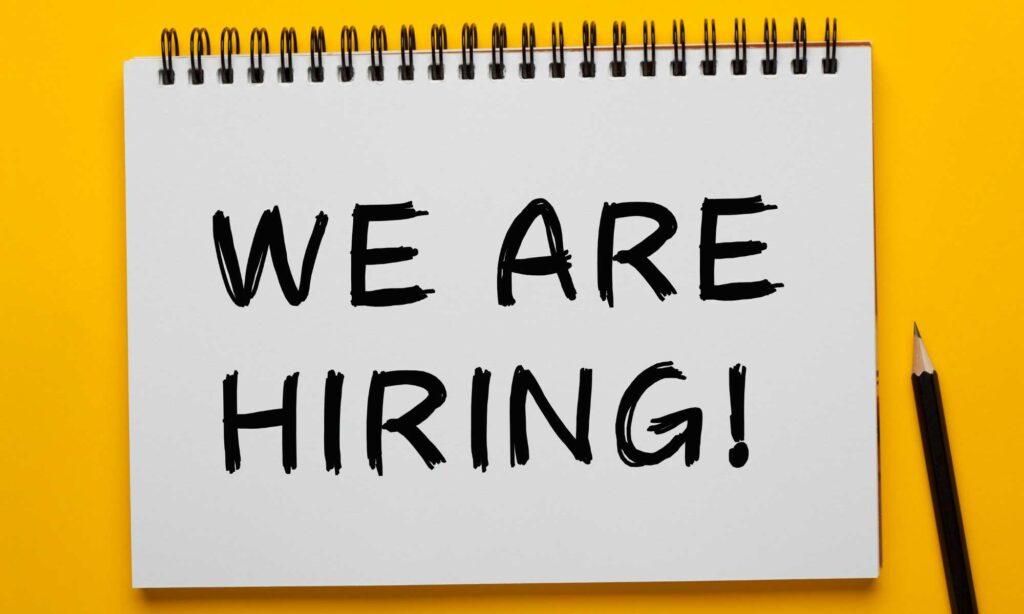 We'd love to have you join our team! Current open positions include Marketing Manager, Development Manager, and Membership Manager.

We reserve the right to change or cancel classes, instructors, schedules, policies, and/or prices at any time.

New things are happening every month at the JCCMW! Be the first to know and get access to register early when you join our email newsletter.